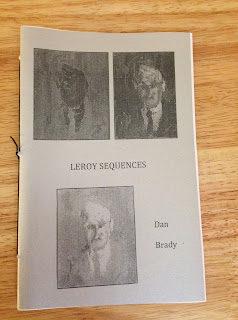 Horse Less Press recently published Dan Brady's poetry chapbook titled Leroy Sequences, a nod to French painter Eugene Leroy. While the painter's subjects are often considered traditional - nudes; still life - it's how he painted them that set him apart from other painters. Known for making his surfaces excessively thick with paint, his canvases have been compared to topographical maps. As a result, his subjects are nearly obliterated, but often remain strangely visible.

Brady's work attempts to mimic the painter's layering of materials, but with language. When you first begin the Leroy Sequences, the page is barely populated with words. Padded heavily by white space, the words seem staggered on the page in no particular design. While the first page is more white space than text, this ratio dissolves as one turns the pages and what was once a poverty of language becomes an abundance. The poetry accumulates. The effect upon the reader, both visually and cognitively, is startling and the reader realizes they are watching the processes consistent with an erasure poem - but in reverse.

Often in erasure, the original text is felt through it's absence and also through the echo of the poet's scalpel, but in Brady's case the original text is felt by it's impending arrival. Rather than demolition, the book's layout wishes to emphasize fulfillment. Not only that, since each stage of that creation is rendered for us, we get to chart the meaning of each part as it strives to become its unique whole. We witness the subject being made, instead of dismantled, by the very material that allows it to exist. It's a level of intimacy that's striking and uncomfortable and made all the more so because Brady's operations are applied to his own work and not the work of another writer. The gesture is lyrical and one feels that the poet has unlocked a method that validates expression without making it a site of narcissism.
Made up of two distinct poems - "The Deep and Narrow Night" and "Terms of Service" - Brady's concerns in the Leroy Sequences are neatly demarcated into two categories: the interior life and the public life. It might sound like a simple binary, but let's be honest - what else do we have? Also, the poet, for each poem, chooses a user-friendly diction and considering the formal ambition of the book, this is the right choice: by entangling an eccentric method with a communicative diction, it provides the chapbook with a satisfying equilibrium.

In "The Deep and Narrow Night", Brady puts into movement his ominous fragments and we watch (and read) how they slowly metastasize into a depiction of madness within a solid block of prose:

But I will always be here. Whether you like it or not and I need you to be here too. I need you to please just hold on. Hold on just a little longer and we will come through this together. Let's try to get some sleep. Put your head to the pillow. I'll be here. Just relax. I'll be here when you wake up. Try to rest. You know, I felt this way before. Sometimes you think it'd be easier just to not exist. I've had days where during the breaths between sentences, the phrase "You should kill yourself" is the refrain in my mind. I've had days when it seems that the route to the least pain most quickly is to run away and disappear, to start over someplace else with nothing.  And that would be better than here. But that's not true.

Harrowing and disturbing, this self-soothing drama, this sort of hostage negotiation, is so naked that I can't help see it as a response to Eugene Leroy's trademark opacity. It's as if Brady shows us the painter's thinking prior to the act of painting. And yet clearly it's describing the poet: instead of paint, we have "phrases" and "sentences". Furthermore, by using phrases associated with melodrama - "to run away and disappear" and "to start over someplace else" - I wonder if Brady is making a particular argument: melancholy wrecks what we might think of as poetic language. In other words, despair, rather than heightening language, coos us into a more common vernacular.

In "Terms of Service", we are confronted on the first page, and in the center of it, with this single phrase: "there is proof". In the pages that follow, this phrase is joined more and more with its co-collaborators:

those agents and contractors

an unacceptable violation of
all the things I wish

What these disparate fragments eventually become is a mediation on the surveillance state. By the time we get to the poem's final block of prose that these fragments are destined to become, we find (at first) the poet taking a quizzical approach to being spied on, as if accepting this new norm of being watched:

How boring it must be for those agents and contractors to read my emails to my wife. Common topics include: what to eat for dinner, that funny thing that happened at daycare, and how much I miss her during the day. My work emails bore even me. My mother's emails are almost incomprehensible, filled with the kind of stilted formalism like the letters from the Civil War.

Brady's musings turn more troublesome as he wrestles with the implications of having hard evidence the US government spies on it's citizens: "and now there is proof, so can we assume all the rest that is to be assumed is true too? If we knew every item in the black budget, what change would we demand?" It's a pretty straightforward question and one feels the weight of the poet's invocation of the Civil War earlier in the passage, when people died - rather than blow off steam on Facebook - to see their vision of a just society realized. And it's telling that Brady connects the Civil War to his mother's "stilted formalism", as if associating the artifice of formal diction with moral clarity, and perhaps, in turn, the colloquial with apathy. It's not clear if this is a point Brady intends to make, but regardless, a reader knows by having to ask the question - what change would we demand - the answer is obvious: probably none. Also, by titling the poem "Terms of Service", a kind of consumerist social-contract we tacitly agree to without reading the actual "terms" (yet another hint at Brady's conflicted view of language), the poet takes the expectations that government has of its citizens, and the expectations capital has of its consumers, and makes them indistinguishable: the individual must remain compliant.

For being such a small book, the Leroy Sequence is a powerful effort. A mixture of erasure, the lyrical, and the political, Dan Brady's chapbook is one of the best I've read this year because it's intrinsically inviting, without sacrificing complexity. He reaches for the reader while maintaining the integrity of his own creative ambitions. Many poets struggle to do that. Not this one.