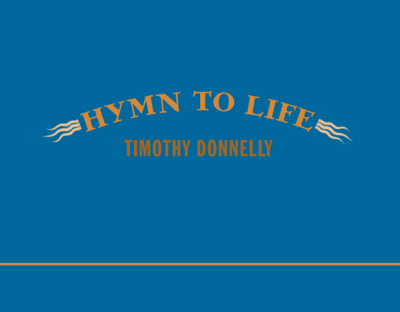 We only see the wind because we see the tree’s reply to it. Timothy Donnelly’s long poem Hymn to Life behaves similarly, but instead of the tree, it’s the past, and the force, rather than being the wind, is life. Topping out at sixty stanzas, un-serialized, populated by facts pulled from natural history with digressive little reveries into pop-culture, biography, antiquity, and personal anecdote, the intrinsic spirit of Hymn to Life – perhaps one of the best long poems written in recent memory – is sympathy:

…There were no Steller’s sea cows, the tame
kelp-nibbling cousins to the manatee, albeit double their size,

and there were no great auks. The last known pair of them
was claimed on July 3, 1844 by poachers hired by a merchant
itching for tchotchkes to ornament an office. Three long
winters later, rescue sledges bundled McClure and crew up
and sped them back to the claps of Britain. Soon Banks Island’s
musk ox population whittled down to nil as their flesh gave

way to the hungry Inuit who trekked up to 300 miles to strip
McClure’s abandoned ship before the ice crushed her completely,
folding her metals into Mercy Bay. “I took him by the neck
and he flapped his wings,” the poacher said. “He made no cry.”
Inuit shaped Investigator’s copper and iron into spear- and arrow-
heads as well as knife blades, chisels, and harpoons like those

depicted in lithographs in the mitts of seal hunters patiently
stationed at breathing holes in the ice. But there were no
broad-leaved centaury plants, no western sassafras, and no
Galapagos amaranth, cousin to the seabeach amaranth. Its tiny
spinach-like leaves once bounced along dunes from South
Carolina to Massachusetts till habitat loss, insensitive beach-

grooming tactics, and recreational vehicles slashed figures
drastically. When ice decides it must feel like being splintered
from a multiplex of tightness that pains but holds together.
Aerial shot of 1961. Year submarine thriller K-19 and Saving
Mr. Banks are set in. Kennedy is president. The cloud of a hundred
musk oxen migrating back to Banks Island rises plainly as

narrow-leafed campion, a handful of whose seeds had slept
30 millennia before being found in 2007 in a ruined system of
ground squirrel burrows. Surveys will report up to 800
heads in 1967 and a thousand more in 1970. All matter thunder-
cracking belowdecks: hoof of earth into water, water over
air, air under water and up. So that the vessel, broken, settles

onto sea stars on the floor. The seeds were sown successfully
under grow lights in Siberia, deep in whose permafrost
international high-fiving scientists discovered a fully intact
woolly mammoth carcass. To enlarge my sympathy I attempt
to picture the loud tarp tents around the digging site, the lamp-
lengths they putter away to, the costs.

First appearing in Poetry Magazine and then as a chapbook published by Factory Hollow Press, the poem’s over-abundance proved too much for some readers who admitted to quitting Hymn to Life halfway in. The failure of those to complete the poem was in part due to its repetitiousness, which created an expectation of predictability. As a result, some readers believed they didn’t have to complete the poem to appreciate its meaning and it’s somewhat understandable: at times Hymn to Life has the vibe of a conceptual poem. And yet it’s not and by not reading the entire poem, its full meaning cannot entirely be apprehended. On the other hand, for those readers who never completed Hymn to Life, the poem’s meaning was certainly felt. Dissuaded by the poem’s breadth, and since its biome didn’t reflect the modality of customized experience we’ve been habituated to prefer, some readers were exposed by their failure to simply focus on something so time-consuming and not of their choosing.

The set-up to Hymn to Life puts the speaker in the position of constantly looking backwards and as that backward-looking process evolves, the poem gets smaller and smaller as it nears completion. Inescapably, so does the future. Hymn to Life is a poem about approaching extinction by participating in it, but not only as a species – human and otherwise – but as someone with the imaginative faculty to create (and destroy) and this is, it seems to me, one of Hymn to Life’s central challenges to the reader: how does one see life through to the end?

In The Logic of Sensation, Gilles Deleuze’s book on Frances Bacon, he writes “In art, and in painting as in music, it is not a matter of reproducing or inventing forms, but of capturing forces.” Donnelly’s work has always been interested in seizing potency and in Hymn to Life he’s still at it, but seizing that potency by combing the terrain of years gone by. With vigor, the poet obsessively accrues information from the past, filling the poem with mostly extinct or endangered animals and plant-life, but also with trinkets of history and micro-asides.  What makes Donnelly’s work in general so uniquely his own is his fidelity to articulating an inner surplus. In the case of Hymn to Life, that surplus is teased out from within the past, and the result is a brilliant one: Donnelly has created a gorgeous, but melancholy memory project. Located in the great previous, we watch as the speaker exhaustively harvests various intersections of data, penetrating facts into other facts, each occurring at different points in time. Reading Hymn to Life gives one the odd sensation of the forward mobility of reading itself, a progressive movement, but in this case one that is always a constituent part of the same erstwhile. And like the extinct or vanishing or tinkered-with biosphere Donnelly describes, the speaker gets closer – one stanza after another – to joining them. The overall effect is unsettling because the multiplicity of Hymn to Life gives the poem a linguistic élan vital, but so relentless is its total expression that relief feels inevitable.

Deep into the poem, the poet writes (see above) “To enlarge my sympathy I attempt to picture the loud tarp tents around the digging site, the lamp-/lengths they putter away to, the costs.” This phrase “to enlarge my sympathy” might be one of the most earnest attempts by the speaker to locate a technique by which one can relate to the world most humanely. Henri Bergson famously used the word “sympathy” to describe a way in which an individual could reach a state of humility, or what we might think of as surgical-imagining, where the subject proceeds into the object. For Bergson, sympathy was rooted in one’s ability to imagine someone's pain, but from out of that originating source of the word’s definition, it evolves and changes, and according to Bergson one didn’t arrive at true sympathy until completing an internalized process in which one transitions from “repugnance to fear, from fear to sympathy, and from sympathy itself to humility.” We see Donnelly potentially reach this humility at the end of the poem, where the superstructure of the past dissolves into the granular existence of the domestic:

…I told my friend Dottie

when saddened in the predawn I have seen the people pushing
small mountains of soda cans in their shopping carts stop
in front of my recycling, open one bag after another of empty
metal and glass, dig through them, take what they need and shut
the bags back up with so much care it has destroyed me. I remember
bathing my daughter when she was two and how I stopped

short thinking if I were gone tomorrow she wouldn’t even
remember. The year was 2007. Radio waves associated with
cell phones may not have been contributing to recent declines in
bee population. “And if you must destroy me,” says the poem,
“I’ll tear myself away from you / as I would leave a friend.”
When there was time to put away the dishes, they were gone.

When Donnelly describes seeing people rummaging through his recycling and watches them close the bags with “so much care”, the resulting feeling he experiences is one of devastation. Rather than some form of hyperbolic pity for the scavengers, the emotion is evidence of the speaker’s total immersion in the moment, hence finding himself not reporting the scavengers, but being within the scavengers and also the very movements they enact when they carefully “shut the bags back up”: true sympathy. Following this, the speaker reproduces the Bergsonian process of sympathy by experiencing next the sensations of humility as he bathes his two-year old daughter, realizing that if he were to die she would never remember him. It’s something every parent contemplates, and therefore not particularly remarkable, but in the context of the poem’s temporal concerns it hits the perfect note: why is it important to remember? Or more broadly: does it matter how we remember?

The last line of the poem is equally intriguing in that it recalls a moment earlier in the poem where Donnelly confesses that he promised his wife he’d do the dishes before the babysitter arrives. However, he’s too busy working on the poem titled "Hymn to Life" and he confesses “I won’t be a person of my word tonight.” But one wonders, as the speaker finally finds time to do the dishes and discovers they’re already done, if that’s all he is: a word’s blind faith in a tomorrow. When his intention to wash the dishes finally moves towards its fulfillment, the dishes are gone: and so is the poem, so is the poet, and so is the reader.

Perhaps what makes Hymn to Life one of the most important long poems written in the last several years, aside from its spectacular humanity, is its cultural relevancy. While many will (reasonably) want to put the poem squarely into the category of ecopoetics because of its reliance on natural history, and one cannot deny the poem’s ecological preoccupation, the poem is more philosophical at heart; a critique of the nature of time and data in modernity. In his book 24/7: Late Capitalism and the End of Sleep, Jonathan Crary characterizes our life in a digitized capitalism as one long “duration without breaks, defined by a principle of continuous functioning.” The dynamism of Hymn to Life reflects this model of living, and its consequences, through its unremitting flow. It’s no wonder only three of the sixty stanzas in Hymn to Life end on a period and why some readers were resistant to engage the poem: since its excessive energies couldn’t be customized, why bother?

A hymn is a song of praise and this poem is too, which makes it refreshing in a critical climate that is routinely negative about life. Daily experience might be daunting in a morally impoverished world, but it doesn’t mean, Donnelly seems to be arguing, we accept it and live in a society where the most sanctified act we make in a given day is posting on Facebook a link to an article about the latest injustice. Within praise is the inevitably of loss, and Hymn to Life always holds these two feelings suspended before the reader at once. Its atmosphere of sadness and hope is the outcome of knowing that when we have nothing left to praise, when we reserve the exclusive right to know only what we want to know, then the incentive to preserve vanishes. By transcribing the past – and having the unprecedented ability to do so – Donnelly shows how it can possibly nurture (rather than inconvenience) the present and that without memory our compassion for all that lives becomes endangered.